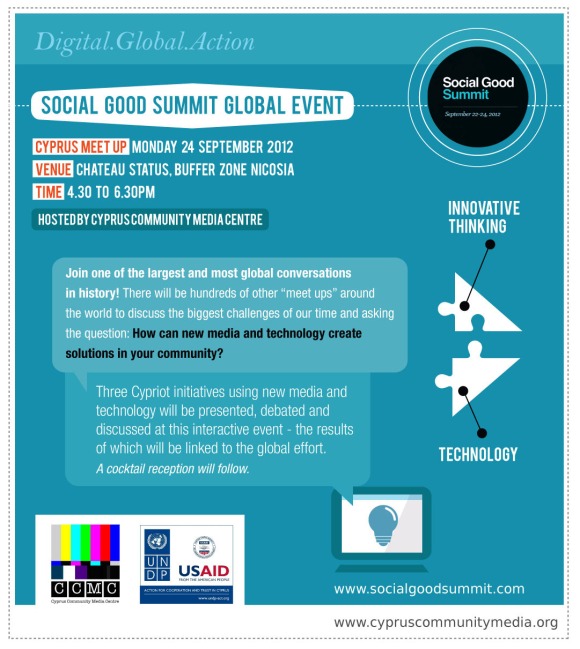 Need an Incentive? Check out our Awards for Media Collaboration!

The summer is well and truly over!

Following hot on the heels of the launch of Make Media 2012 CCMC is taking another bold step towards promoting deeper collaboration between the media across the divide with the launch of its groundbreaking Incentive Awards for Media Collaboration.

Many of you will remember, or will have been involved in, the Collaborative Media Initiative, or CMI for short, a project run under the auspices of CCMC. Well, the final report entitled “A Potential Untapped: Media Working Together across the Divide in Cyprus” (read the whole report on our issuu account) recommended that CCMC continue its work in promoting professional collaboration between the media in Cyprus, as well as position itself strategically as a ‘first point of call’ for all interested in working with colleagues based across the divide.

And we listened! The Incentive Awards aims to promote professional collaboration between the Greek Cypriot and Turkish Cypriot media and encourage the emergence of a public media space for common use for all Cypriots, and CCMC is inviting proposals to be submitted for Awards in the following categories:

Institutional Collaboration: which establish partnerships between media outlets across the divide

Television Production: for the coproduction of public service announcements and other short-length co-productions on issues of relevance to all Cypriots

Online Media: for the creation of web-based forums for information exchange and the sharing of opinions across the divide.

Help us spread the word, and encourage potential applicants to read the Terms and Conditions and submit an Expression of Interest (EOI) form. Both documents are available here. The total budget we have earmarked for the Incentive Awards is €15,000, and we are accepting applications in English, Greek or Turkish.

We’ve set a deadline for submission of the EOI forms on 30 September 2012.

We are waiting to hear from you!